How We Know Sunset Park is Tame (parking-wise, that is)

Parking issues are often a touchy subject. Is double-parking "allowed" during alternate side times? Are parking spaces ever saved? If someone blocks you in, how long do you honk the horn before taking extreme action like calling a tow-truck? Is that extreme?

Well, in more parking strapped areas like Bay Ridge, Brooklyn Heights, Cobble Hill, and so on, the little scenario I saw today would probably never have happened. And despite many claims to the contrary, this event shows that Sunset Park is not as grizzly as some say.

The City's "Strongest" came along, and after dumping the trash from two metal cans decided that they just weren't strong enough to put the can back on the sidewalk. It was quite strange, really, he carefully placed (instead of tossing) the can in the middle of the space you see in the photo below.

This looks very similar to when someone decides he has a private parking space and reserves it by putting a can/cone/body in the space to hold it. Well, no person was attending this can since the sanitation worker was long gone, yet no one came to take the space. Not unusual since it was around 8:30 AM and people tend to leave this block for work, and it's not an alternate side day today. However, as time went by.... 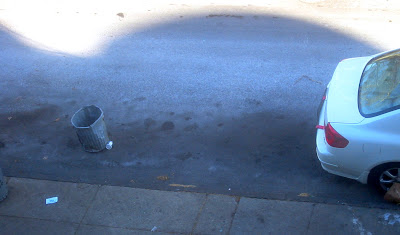 ...still no one came to take the space! This second photo was close to 10 AM, and the spaces on the block are scarce now. What does this tell me? Well, for one, the resident to whom this belongs didn't move it, nor did a friendly neighbor (who me?) move it. But more importantly, it tells me that Sunset Park residents, at least close-by, aren't hard-core parkers. We'll see how long this space lasts. I'll bet that the closer it gets to 11:30 (alternate side time for the next block up), the less chance this space has for survival.

*Around 11 AM a pro-active neighbor moved the can to the sidewalk. Well done!

Such excitement around here this morning!
Posted by BestViewInBrooklyn at 9:57 AM

Nice post! As a new resident of Sunset Park and a vehicle owner, I have been pleasantly surprised to find parking relatively easy around the neighborhood (so far). I don't mind parking on the avenues or walking, so perhaps that has made it easier. I don't have to be in front of my building.