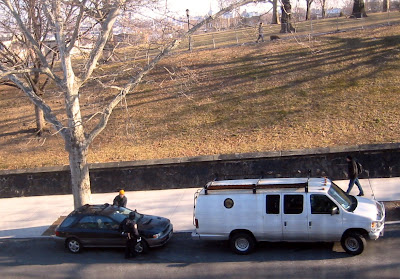 You have to get your car off the wrong side quick. Sometimes you get lucky; other times, you're just seven minutes late and it's a done deal. 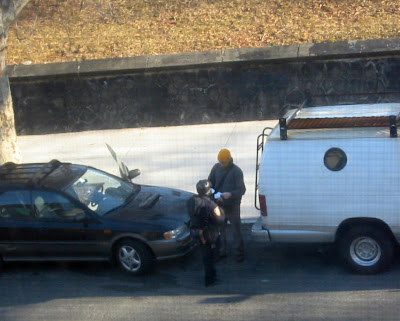 This guy looked genuinely stunned that she stuck the ticket on the windshield despite his presence. She had already scanned the information and written it up, so he really was just two minutes too late here. They had a very civilized conversation about the situation. Nice to see. I think he was still in shock, though. It was past 8:30. And it's not like she had been waiting there at 8:25. Afterwards, she walked leisurely to the van and the other car up the street. No staking out today.

The following photos show the worst in un-neighborly behavior.

Now, you might ask, "How the heck did he get his car like that?" Well, HE didn't. The car in front of him did it. Or at least that's what it seems happened, judging from the young man's reaction when he saw the car. The owner of the middle car LOVES his car. He takes really good care of it and he even shows respect when parking. His bumper is clean - without a bumper cover. No squeezing into spaces for him. Then this happens. 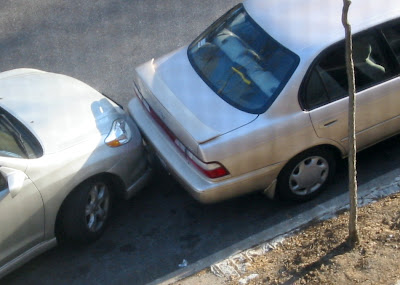 I mean, come on people. I know parking is key, but the next block up usually has spaces available. Or doing a round or two will show a parking spot in easy walking distance. Do you really need to crush the signal light and MOVE the car behind you to get a parking spot? (Actually, some people seem to think it is necessary.) If it's that important to you, you should have planned better.

Even though he was pretty upset, the owner didn't go ballistic or take out a key or even leave a nasty note. Those would have been un-neighborly responses. Especially without definite proof. He also couldn't move his car without causing further damage. Hopefully it will all turnout well - little or no damage, little or no negative interactions, and future courtesy on all sides. Perhaps there needs to be an official Etiquette of Parking in general. Double-parking has some unspoken rules.
Posted by BestViewInBrooklyn at 8:46 AM

The worst is when you get a ticket in front of the school. Those things are expensive. I live on 44th street and I leave at 6:45, but one morning I was running late and got to my car at 7:01. The parking ticket lady was by my car and she handed me the ticket as I got in.

Hey that's me!
Despite the fact that it's a little creepy that I was being watched (and photographed and blogged about), I'm glad that you're sympathetic with my plight this morning. I have to go to court to contest another erroneous ticket and I'm thinking about printing this out to show that I was there when the ticket was issued. If you have any more photos that could be useful, let me know!

Sorry, Oliver. I even looked at the clock for you, but it was definitely well after 8:30 AM. She had already scanned it and written it. It sucks, but we've all been there (or very close to there) at some time.

And don't worry, it's not that creepy. I'm so good at doing the dishes that I can look out my window at the same time.