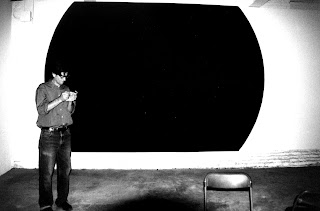 They've outgrown their space. This Tuesday will be the first presentation in the new Light Industry space at 220 36th Street - now on the 5th Floor. Movin' on up.

This week, Light Industry is relocating to a new, larger space at 220 36th Street in Building 2 of Industry City, just around the corner from our current 33rd Street location in Building 9. As we expand our programming substantially in 2009, this move marks an exciting new phase in Light Industry’s still brief history, and is a testament to Industry City’s continued generosity and support of the project.

Only in Darkness Is Your Shadow Clear

A projection performance by Bruce McClure
“Strobing can be defined as an illusion, or impression, created by a regular relationship between the speed of the subject matter being photographed and the interval between exposures. Wheels that appear to be turning backward, despite the obvious forward motion of the vehicle, offer an excellent example of this kind of illusory effect. Strobing is generally regarded by a cameraman as undesirable and is often minimized by changing the number of spokes on the wheel. Meanwhile, in the repose of the movie house, with photography behind us, it is the phasing of light and sound and its cessation, all according to the constancy of the projector’s action that provides us with an occasion for a desirable mental wandering...

“This said, I will conclude my descriptive treatment of ‘Only in Darkness Is Your Shadow Clear’ by saying that the audience will witness another resurrection of the incandescent machine age. I will use three modified 16 millimeter projectors, three film foliums, two of which that will be bi-packed with loops, guitar effects pedals and two loudspeakers. I would also like to note that the title for this show comes from a poem by Hart Crane and is a correlate of lyrics taken from Monster Magnet’s ‘Dopes to Infinity’ – I can see by the hole in your head that you want to be friends you’re the right one baby.” - BM

Followed by a conversation between McClure and Glen Fogel.


Posted by BestViewInBrooklyn at 1:06 AM