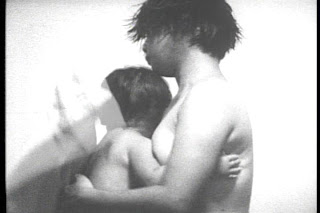 Light Industry will host Hara Kazuo for a screening of Extreme Private Eros, followed by an author appearance and book-signing.

Born in 1945, Hara Kazuo was influenced as a young man by the protest movements that took place throughout Japan and the world in the late 1960s and 70s. He founded Shisso Productions in 1971 with his wife, producer, and primary collaborator Sachiko Kobayashi. He has published five documentary films thus far, including the award-winning The Emperor’s Naked Army Marches On, widely recognized as most important and influential documentary ever made in Japan, Goodbye CP, A Dedicated Life, Extreme Private Eros: Love Song 1974, and Watashi no Mishima.

from the press release:

Hara Kazuo's innovations have transformed documentary filmmaking. Now, Kaya Press is pleased to announce its release of Camera Obtrusa: The Action Documentaries of Hara Kazuo. In support of the release, Mr. Hara will be touring the US in April and May, appearing in New York, Princeton, Los Angeles, and San Francisco.

Throughout the four decades of his career, Hara Kazuo has stalked the bizarre and disturbing margins of Japanese society, certain that central truths are to be found in fringe phenomena. His "action documentary" method pursues the shocking effect of the action film, following the gesture and staying in the moment. Hara's explosive technique has contributed directly to the current ascendance of the documentary film; his best-known disciple is Michael Moore, who lists Hara as one of his favorite directors.

In CAMERA OBTRUSA: HARA KAZUO'S ACTION DOCUMENTARIES Kaya Press offers the first English-language book on Hara's life and method by the master himself. Digging into the practical elements of his craft, the author describes each of his groundbreaking films in detail; he puts his work into context with a funny and heartbreaking visit to his own strange upbringing.

Kaya Press will launch CAMERA OBTRUSA in May with a five city author tour featuring screenings of the films The Emperor's Naked Army Marches On and Extreme Private Eros: Love Song 1974. Director Hara Kazuo and his life and filmmaking partner, producer Kobayashi Sachiko, will appear at all events with a translator, and will sign books afterwards.
Posted by BestViewInBrooklyn at 1:03 AM