Kittens and the 72nd Precinct

The 72nd Precinct has had a lot of action lately. Between catching bodega robbers with guns, patrolling the park and picking up passed out revelers, checking out the 45th Street station for nefarious behavior, and racing up side streets to address emergency calls, they've certainly got their hands full. And that's just the activity I have heard about in the last 48 hours! If only they'd let in those of us without press credentials to check out the blotter on Tuesdays, I'm sure we'd see much more of their good works.

Here's one good deed that took some pressure off the officers. And it helped cement some warm, fuzzy feelings towards our precinct. At least that's the distinct impression I got from watching this drama unfold yesterday afternoon.

A group of children and adults stopped to check out a box* left on the side of the road; perhaps they heard sounds coming from the box. Once they peeked inside, they had a short discussion of what to do, and then called either 311 or 911. This group waited by the box for about 15 to 20 minutes until 72nd Precinct officers showed up to assess the situation. See for yourself.

* The box was one of those carrying boxes you see kids selling candy from. It had a colorful spaceship motif. If you saw someone carrying this near the Park on Tuesday, that was the kitten-abandoning culprit! 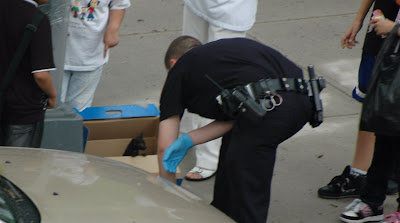 After opening the box, this officer donned blue protective gear to get a closer look. (Not being a cat person, and having allergies to the furry dander beings, I would have too.) One little black kitten poked out his head to check the condition of his surroundings. 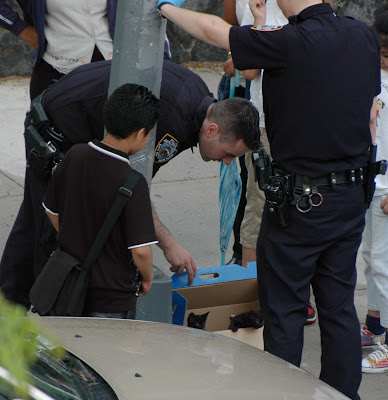 Another little guy joined his sibling's curiosity. The second officer was more daring; he dove right in without gloves and took a look at the kittens. 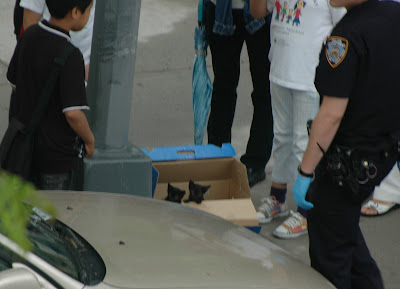 How cute are these two? Even though I'm not a cat fan, I have to admit I was tempted to take them in. And then I thought better of it. The kittens were loaded up into the police car and driven away. I suppose anyone interested in adopting them could call the precinct at (718) 965-6311 to find out where they went. Otherwise, go to the Love Wanted event in Bay Ridge on Saturday. (I think the post goes up tomorrow.) The good news is, they looked in healthy condition. And no one had done this to them.
Posted by BestViewInBrooklyn at 8:30 AM