Suggestions for Relaxing in Sunset Park

The weather promises it will be another weekend of stunning weekend fun in Sunset Park. Taken from last weekend's participants,here are some suggestions for park lounging.

These photos are in descending order based on their relaxation quotient. The order may change (except for the first two) at any time. 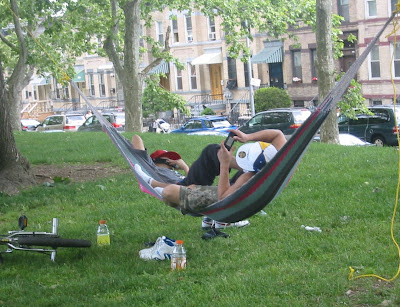 String up a hammock and hang out with a friend. Communication with said friend is optional. Communicating with other friends (real or virtual) can and should occur while hanging out with the friend actually beside you. 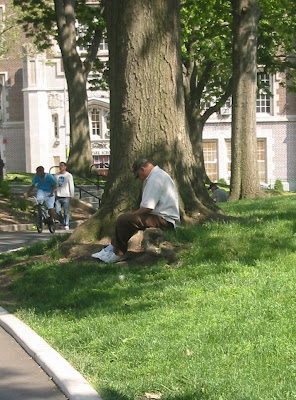 Sit by a tree and meditate, doze, or stare off into space. Occasionally lift your head and waggle eyebrows at passing neighbors. 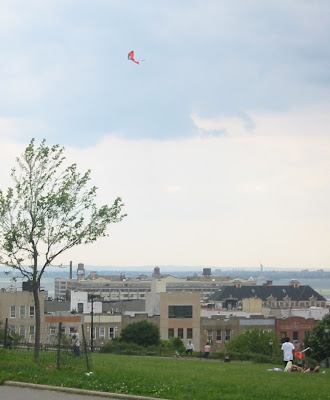 Fly a kite. This is very relaxing if the wind is good. However, it immediately becomes stressful if your kite bonks a nearby family. Wear your running shoes.

Form a wagon circle with some friends and chat while playing with children and snacking. This is relaxing for parents of babies and young toddlers and for friends who don't mind young toddlers. Once your children hit two, it's no longer relaxing as they run off at quite a clip.

Skate. The goal of these young men was to flip their boards and land with two feet on the board after flying over the "top eight" steps. One kid did it on his first try. Apparently, that's very relaxing since he proved himself early on and didn't have to worry about future success.

Play soccer in the wading pool. It didn't look that relaxing to me, but the participants were having a lot of fun. 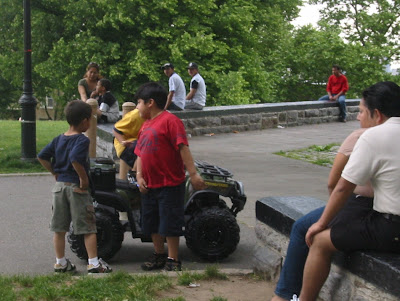 Ride a mini-ATV. This was kind of relaxing for the kids riding it. It was not, however, at all relaxing for those of us walking the same paths as the four-wheeled-monster. One of the boys riding it was acting like a cell-phone-talking-pass-the-too-slow-drivers-with-double-parked-cars-all-around Brooklyn driver. I mean really, he wasn't even looking forward. I know the view is fantastic from the park, but watch where you're going!
Posted by BestViewInBrooklyn at 3:22 AM

Reminds me of the time growing up in the 80s, playing softball with my friends all day long.... then going home exhausted and hungry to my Mom (may she rest in peace)