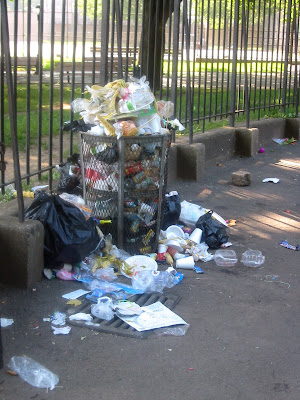 I've often complained about park-goers garbage habits, and after seeing this morning's showing of corn cobs, stink bombs, plastic uzis, confetti poppers, silly string, rum bottles, whole wheat bread wrappers, and other general trash items in the playground this morning, who could blame me? (Sorry about the lack of photographic evidence; my camera has finally and completely died. I did manage to salvage one trash can photo.) Not to mention that the one, lonely Parks worker was provided with an old school metallic rake to clean up the mess. The one trash receptacle was piled high, and its sides showed ample evidence of the "Can't fit it into the trash bin, so I'll just throw it near the trash bin" attitude. Most of the trash was food related despite vending or eating being discouraged in the playground area.

My first response was something along the lines of "People can be so disgusting and irresponsible and lazy and rude and inconsiderate." While I still think all those things, I also have to give some responsibility to the Parks Department. My understanding is that there aren't any clean-up crews over the weekends, but there are (minimal) workers for the park in general.

Considering that Sunset Park is well-utilized every day of the week, but especially on the weekends, and considering that it houses one of the two public outdoor swimming pools in Brooklyn, the Parks Department needs to provide much more than the current inadequate maintenance and hygiene within the park.

What can we, as residents of Sunset Park, do?

One area that I am guilty of neglecting is being pro-active about refuse around the park. While I will pick up broken glass on the sidewalk, razors in the dirt, and large bottles of Dominican Ron, I haven't confronted litterbugs (except under my breath) unless it's been an egregious example in the playground. I don't usually close the gates to the playground when I enter or exit. I haven't called 311 to report the repulsive condition of the playground (and I wasn't alone in thinking so, really! In fact, it was a caregiver to one of my son's friends who started the conversation). And I know there are other things I could do - I just can't think of them right now. Feel free to chime in.

Now, I know, confronting other human beings about their behavior is such a troubling topic for many adults. You never know what you're going to get back. Since becoming a parent, I've become decidedly more careful about speaking up. When my mouth doesn't get ahead of me, that is. Any suggestions on successfully recruiting stewards of the park from any readers out there? (You don't have to admit if you gave or received the words of encouragement.)

Basically, I want to feel comfortable using my park. Today's trashy-showing was probably the worst I've seen in many years. (Again, I'm not alone in this observation. Another neighbor said this before I did. Really!) I know that one of the factors is numbers; the playground already had at least 30 kids (plus another 30 adults in various poses) by 8:30 this morning. The park was also jumping with activity at that early hour. However, close quarters does not excuse dirty and dangerous behavior; it should encourage us to be even more careful about our waste.

I'm going to try and be more pro-active. Hopefully I won't feel like a complete dufus all alone. I mean, more so than I usually do.
Posted by BestViewInBrooklyn at 5:12 AM

You will not be alone. I will be trying to do the same.

We're thrilled to hear the interest expressed in "what can we, as residents of Sunset Park, do?" And, the answer is: quite a lot. Friendsof Sunset Park has been reporting to the Parks Dept., the elected officials, the CB and anyone who we thought mght be interested, on the playground's condition for years (14 to be exact). The writer of this blog has been in close contact with Friends of Sunset Park for a number of years and we thought she was aware of the many levels of stewardship of the Friends: It's My Park Day, CityParks Kids, Petitioning for traffic calming STOP signs and speed bumps on 41/44 streets, Recruiting (albeit unsuccessfully) for parents/grandparents to lock playground at 9/10pm, as well as trying to form a Parents' Committee to lobby for a long overdue rehab of the Playground, to name a few.

We are, therefore, looking forward to sitting down with all who are interested in working to form a Friends of Sunset Park Playground Committee to prepare a unified plan of attack and getting to work on keeping the playground clean and finding the $ for much-needed repairs and improvements.

I'll be in the Sunset Park Playground tomorrow (Wednesday) morning at 8:30a-11a.m., and again on Friday and Saturday mornings to get to work.

See you all there!
friendsofsunsetpark@yahoo.com

Overflowing trash cans are a problem all over Brooklyn. I was visiting McCarren Park for a craft fair a few weeks ago, and at the very beginning of the fair, all of the cans were full and overflowing. In my neighborhood (Park Slope/Boerum Hill), corner garbage cans are often overflowing even when there are no events. I'd love to find a way to fix this problem everywhere... and budget cuts don't help.

I understand your frustration at the litter in Sunset Park, because I live by Owls Head Park, and it has the same problems. Every weekend people come to hold giant picnics, and leave lots of trash behind them. The park employees do a great job, but there is only so much they can do. In the past, I have confronted people about litter, and not cleaning up after their dogs. It has never had a satisfying outcome. Now my solution is to bring extra bags and gloves with me when I walk my dog on Mondays. I pick up trash as I go.

It can't be only about cleaning up after slobs. We have to avoid the problem of littering happening in the first place. If you speak up and tell people that what they are doing is wrong they will react and think twice next time. The more you pass the word the better. educating different cultures on the effects of littering is key. I am trying to get the vendors fined as well, if they don't keep the immediate area around them clean (harsh yes, but so necessary) and more signs need to be posted in visible places, not to mention for the park to start giving tickets out. When it involves money, people learn real fast!!! But for now, complain, speak up, pick up and you too can create change.

Overflowing trash is a problem all over the city as CookDaddie states. There was recently an article about how lack of cleanup crews on weekends on the Brooklyn Bridge is creating a hazard for traffic, pedestrians, and so forth come Monday morning.

The best approach is to have as many people as you can call your City Council Member - I believe Bill DeBlasio is the representative for Sunset Park, though I can't be sure. The more people that call and complain, the better, the more they will feel pressure to do something about it.

Confronting people, while it might seem like a good idea, and imposing fines on vendors, does not exactly create the best neighborhood dynamic. Let's work together instead and try to lead by example.