What You See in Sunset Park: Building Boom

A lovely walk down 43rd Street to get a papaya drink (I wanted avocado, but it was too early) at Ba Xuyen revealed some activity at 765 43rd Street after their stop work order was rescinded. It's going to be an eight unit building. Add that to the ten units at 713-715 43rd, and I think we're in for one heck of a big block party next year! Let's hear it for development that forces irresponsible population explosions! Go trash pick-up! Go school overcrowding! Go water! Go Park use!

A front-loader was very actively and quickly digging up dirt from the site. Considering the nine complaints lodged against this site in less than a year, perhaps the sooner the better for the next door neighbors. I mean, since the developers around here just do whatever they want with as few permits as they can get away with, it may as well be over as soon as possible. 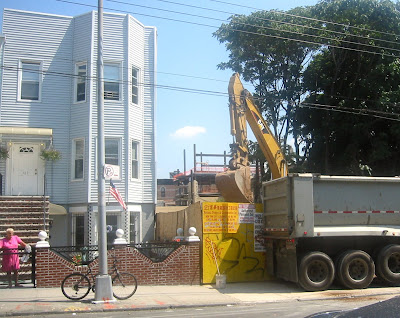 One of the elderly residents of the next door building was taking a look at the work. This is the same building that has a front lawn memorial. The two residents I've seen and said hello to are both very friendly and sweet. I feel terrible that they have had to deal with the demolition and now digging and soon construction that they've endured for over a year already. If you happen to walk by and see anything that seems odd, please call 311. The adjacent building has already had to be repaired more than once due to the demo and foundation at 765 43rd Street. And we all know how well a "repair" holds up. How much shall we bet that 763 gets sold to another (or the same) developer to make another apartment building?

This block of 43rd will soon be all apartment buildings. 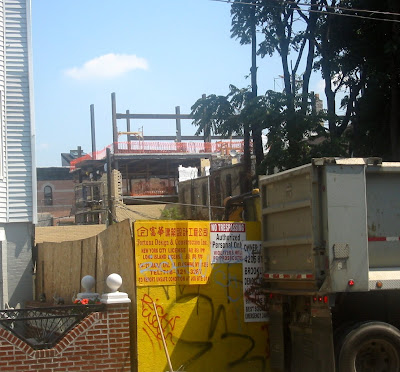 Hey! What's that I see through the backyard? Another apartment building going up on the next street over! Nice.
Posted by BestViewInBrooklyn at 2:01 PM

Beautiful shot! Thank you for your very cool article. Keep up the good work.