Under Minerva Recycles - until October 4th 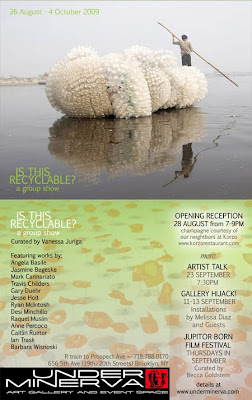 Under Minerva is pleased to announce Is this Recyclable?, a group exhibition that examines how artists utilize recycled products, found objects and other non-traditional materials to create their artwork. This thirteen-person show focuses on artists who break away from traditional materials and use what is often overlooked or readily available to them as catalyst for their creations.

For nearly one hundred years, artists have been using non-traditional objects to create art. In 1915, Marcel Duchamp coined the term readymade to describe his found art. In the 1980s and 1990s, many artists began focusing on mass-produced items. At present, several artists are using discarded objects and recycled materials as their medium. Is This Recyclable? contemplates whether this trend is a response to environmental issues, commentary on the increase in consumerism or an attempt to uncover new meaning for the object.

From sculptures made out of recycled objects, portraits created out of keyboard keys and melted down pill bottles that create a flowing installation, Is this Recyclable? is a dialogue between what the object once was and what the object now is. The artists featured are: Angela Basile, Jasmine Begeske, Mark Cannariato, Travis Childers, Gary Duehr, Jesse Holt, Ryan McIntosh, Desi Minchillo, Raquel Muslin, Anne Percoco, Caitlin Rueter, Ian Trask, and Barbara Wisnoski.

Under Minerva Gallery and Event Space
656 5th Ave. Brooklyn, NY 11215
(Between 19th and 20th Streets)
www.underminerva.com
Posted by BestViewInBrooklyn at 1:55 AM