The last time I got my hair cut, with a guy named Sam who works out of a nail salon on 8th and 41st, we were in the throes of winter.  Last week, I figured it was about time I neatened up the 'do, and since Sam's price is right ($20), I headed over to the salon hoping he'd be able to take me right away.  No go, so I decided to walk along 8th until I found a place that was relatively empty (not too difficult at 10:20 AM on a weekday).  The first place I found seemed appropriate for someone about to turn 40. 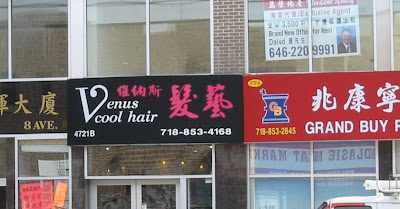 C'mon. Venus and Cool in the same place?  You know I had to go here to live the fantasy, if only for an hour.  Besides, it said women's hair was $15 and up, so I knew it was for me.   (That price is pretty standard for 8th Avenue, but I can only vouch for this place as not being a "bait and switch" for longer/thicker hair.)

Anyway, they whisked me in and settled in to one of those amazing hair-wash-scalp-massages that Chinese run salons do.  This one was amazing.  Not only did I get my scalp scrubbed, but she also massaged my shoulders and arms and back for a minute or so.  That alone was worth the $18 I shelled out for the cut.  Really.

The stylist didn't speak much English, so the receptionist/head scrubber translated.  He was shocked when I showed him how much I wanted chopped off (I mean, if I only go once a year...), so he wanted to double-check.  It was a basic, quick, clean cut.  He seemed to know what he was doing, but I never get anything that you could call a style, so I guess I'm a bad judge/test case.

He was also shocked (and double-checked with the translator) that I didn't want my hair blown straight.  It just looks foolish on me; it's even more foolish than the Rosanne Roseannadanna look I get when a hair dryer comes near me.  I reassured him that five minutes in the wind and damp weather would calm  the wild, poofy look he so feared.  I was charged $18 plus tips for him and the head scrubber.  It may have ended up being a $20 charge had he needed the time to blow it straight.  (It took 45 minutes on my hair last time I allowed it.)

An aside to parents:  A woman came in with her one year old, and she held him on her lap while they cut and colored her hair.  She explained to me that a babysitter is too expensive, so she had to bring him.  I guess their color must be pretty cheap, too.  Anyway, the salon was totally fine with it, and if your kid can sit in a stroller while you get your hair done, it's a way to save on the babysitting.  Of course, this was on a weekday in the AM.  I wouldn't suggest it for afternoons or weekends.
Posted by BestViewInBrooklyn at 12:08 AM

I pay $8 (plus a huge tip of course!) for wash, cut and blow-dry in Chinatown near E. Broadway subway stop!