Only Two Truck Routes in Sunset Park - 39th and 65th

Bet you didn't know there were only two side streets that trucks are supposed to take if they don't have a local delivery.  Here on 44th Street, it sure seems like we've got one of the truck routes based on the number of trucks that go barreling up the hill.  (I know, how do they barrel UP the hill?  But they do!) 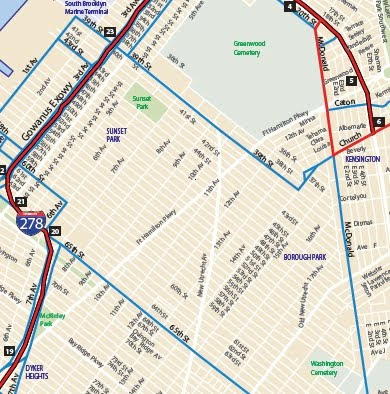 And boy are they loud.  At 10:30 at night, it's loud enough to wake up my one year old from a deep sleep.  What?  NO trucks are supposed to be scurrying around side streets after 8 PM?  Well, guess what, they scurry and barrel and do lots of other mischief.  And these are big trucks.  Not just your box trucks collecting grease (or whatever is in those big blue barrels) from International.  These trucks  are long-distance hauler trucks.

Oh I know, I know.  I can already hear the comments:  You live in a city, get over it.  Go back to (fill in a state I've never been) if you don't like it.  But guess what?  People who live in a city get to have some quality of life too.  Creating less of a carbon foot-print than those who commute into the city doesn't mean having to trade in a night's sleep because of 18 wheels rumbling through your dreams.  And there are long-time regulations set up that are supposed to keep some balance there.

Several neighbors up the street have called 311 many times, and even reported certain trucking companies for rumbling about on non-trucking routes after 8 PM.   It continues to happen every night and day.  If it doesn't bother you, no worries.  If it does bother you on your street, please call or email Marty, Mike, Joseph Palmieri (Brooklyn Commissioner for the DOT = 718 222-7259), and anyone else you can think of.  311 calls create a record of complaints, and especially if you leave your name and an email (which then allows you to upload photos and add on to the complaint) it can be effective.

Even with a generous reading of the truck route information, there is no reason that such a high volume of trucks would need to use our side streets so often.  Why Sunset Park?   Well, we're between the Gowanus/BQE and major thoroughfares like New Utrecht and Fort Hamilton.  But that's just a guess.  McDonald is the next major local truck route, and 39th has the problem of strange angles and turns that trucks just hate.  Why 44th Street instead of 39th?  Hmmmmm.  No traffic light or stop sign at the top of the hill?  Could that be it?  And could that be one of the hold ups for getting us a stop sign at 6th Avenue that would make it safer to cross the street into a MAJOR entrance to the park?  Just speculation and suspicion, of course, but I'll put it out there.

All vehicles defined as a truck (two axles and six tires, or three or more axles) are required to follow the Truck Route Network.

Posted by BestViewInBrooklyn at 12:29 AM

Thank you for posting this. I feel like our street (32nd) gets more than its fair share of truck traffic, but it looks like I'm not alone. In fact, I noticed 33rd has a no trucks sign so I was thinking I'd find out how we can get one but it looks like they're not supposed to be on our street either, sign or no sign, except for deliveries on that street, right?

I haven't noticed it myself, but some of my neighbors on 42nd street have complained about truck noise as well.

There was a tow truck honking non-stop once though late at night. I think that was a different circumstance though.

I wish they could add more routes and perhaps change the times so they are not going around during the late evening.

Such narrow minded, as a daily truck driver, proud with my job, I can surly say that more the truck routes there is in such places the good it can be - more pleasant for truckers, car owners, pedestrians and the neighborhood residents..hope that someone will do something soon.

Nice post. The information presented here was the greatest I could discover all day long, and I have been searching tough on the Internet. I think you ought to put this up on a large social bookmarking website, you will discover that it spreads like wildfire

Thanks for this read mate. Well, this is my first visit to your blog! But I admire the precious time and effort you put into it, especially into interesting articles you share here!

Excellent site ! Good topic .This Great article referring to good topic . It is very interesting . I like it because it has give me very useful information. thank you for sharing

Really your post is really very good and I appreciate it. It’s hard to sort the good from the bad sometimes, but I think you’ve nailed it. You write very well which is amazing. I really impressed by your post.