Sunset Park View of the Marathon

I hope those of you who wanted to got a chance to enjoy cheering on the marathoners. I had a great time. Thanks to four years of varsity swimming, I can yell really well. And in several languages. Both of those skills are useful when watching a marathon. I tried to see the names and countries (Brooklyn counts as a country, right?) of people closer to the middle; I figured they didn't get as much attention. But then I thought, What if they are closer to the middle because people yelling "Whooo hoooo! Go Nicola!" at mile 5 is really annoying to them? Then I figured who cares, it's my marathon too - and I just yelled at everyone I could. 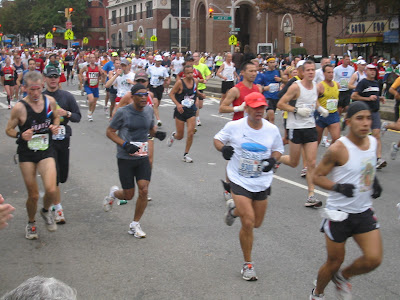 I got to see the mayor go by in an excellent car. In fact, I was looking at the car and wondering who got to ride in it while he was going by. And then he was gone. I got to see the male leaders (elite?) go by. That was cool. There were a good number of costumes, including Eiffel Tower guy, lots of clowns, lots of sparkles and birthday hats, and lots of wigs.

The people close to me were some of the more enthusiastic. The girl below got to hand-slap about 50 or so marathoners. Many made it all the way across the lanes just to slap her hand. I don't know who enjoyed it more: the girl, the marathoners, or the girl's family. That was an encouraging and supportive way to cheer on the runners. 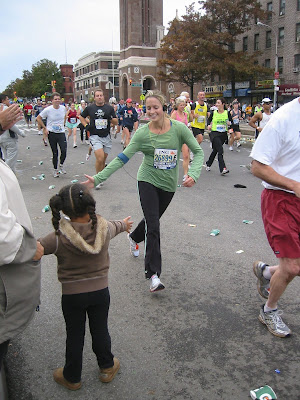 Another guy didn't behave quite as nicely. He crossed 4th Avenue (as some people must) with a younger sibling, but he didn't just cross. He decided it would be funny to run along with one of the runners and disrupt him. He did this when it was still pretty sparse, and he got caught. 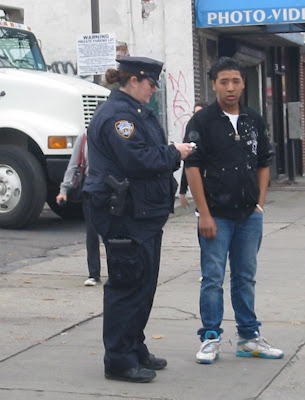 Oops. If you want attention and a ticket, I suggest streaking at a Cyclones game.

There was also a great band on 4th and 42nd. You can follow the singer's twitter here.

You can check out lots of other great Sunset Park photos of the marathon here (around 25th) and here (mid-50's).
Posted by BestViewInBrooklyn at 10:24 PM

Thanks for linking to my photos! I had a really fun time watching and cheering the runners on. It amazed me how many people were in costume (the gorilla!) and then there was the one guy who was running barefoot!