Want to buy a former SRO on 7th and 43rd? It's right on the park. The For Rent signs were quickly changed out for For Sale signs once the mistake was noticed. Makes a lot more sense, and the wind storm last week tore up one of the For Rent signs anyway.

Something is definitely up. There was a man (whose face was covered with a bandana) inside the side door sweeping up the nastiness that builds up in a semi-abandoned building that's left on its own for months and months. See below for what has collected outside the 43rd Street door so far. Mmmmm. Lots of broken glass! And right across from PS 169, too! 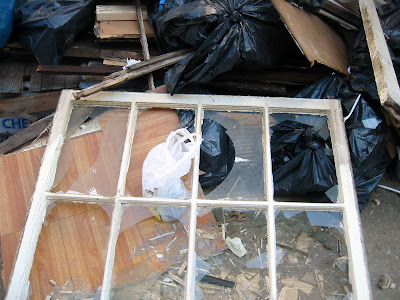 Next door, the activity was heavier and louder. 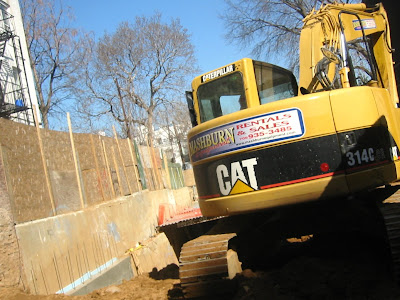 There was a lot of excavation going on at 713 43rd Street yesterday. One 18-wheeler was pulling away with a full load of dirt and detritus while another waited to take its place. This CAT front loader was busy filling up the trucks, and all the workers at the site actually looked busy. All of them!
Posted by BestViewInBrooklyn at 3:22 AM

Sounds like their making an effort to cleaning up the mess.