UPROSE Has a New Ride 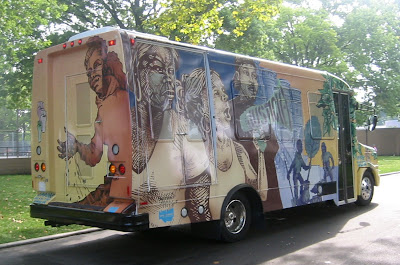 The artwork on the bus was created by Christopher Cardinale from Groundswell. The new hybrid bus was manufactured by Azure Dynamics.
UPROSE has done some fantastic community work over the years, and under Executive Director Elizabeth Yeampierre's leadership, it's been even more active. Now UPROSE has a new tool with which to inform the public about Environmental Justice in Brooklyn, and especially in Sunset Park.

On Monday morning, UPROSE had a ribbon cutting for its new Hybrid Electric Bus in Sunset Park. As the pamphlet handed out at the ceremony indicates, the organization hopes to use the new hybrid bus to "promote sustainibility initiatives and education to fight air pollution, reduce negative impacts from road transport and improve air quality for all New Yorkers." 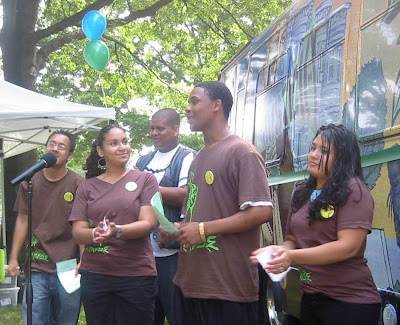 Some of the young and very enthusiastic members of UPROSE.
Various speakers echoed the need to improve air quality. Marty Markowitz gave an impassioned speech about NYC having an unacceptable level of asthma, especially in children. (He also sounded quite angry about our dependence on foreign oil, which leads me to believe that he has more than Brooklyn politics on his mind.) Some of the UPROSE young people presented and spoke about their hopes for the tours and the information they want to disseminate. See below for various photos and scenes from the event. You can contact UPROSE and sign up to take an Environmental Justice Tour at this email address: info@uprose.org. 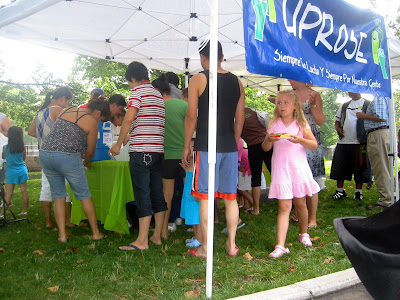 Prior to the event, the UPROSE organizers put out a table full of watermelon, strawberries, mint iced tea, and various baked goodies. Within five minutes the entire table (except a few strawberries) was EMPTY. You would have thought there was a golden ticket in one of the treats the way people filled up their plates. The organizers were incredibly polite; I would have been snatching things off of people's plates. And that's why I'd be no good as a community organizer. Take people, don't hoard! I'd really like to know how many people put even a dime into the collection tin. 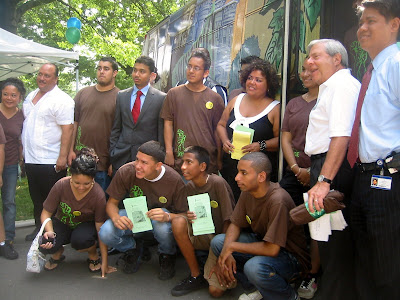 Group photo with Ray Figueroa, Elizabeth Yeampierre, Marty Markowitz, Gil Quinones, Tour Guides Lucille Morales and Cesar Alcaide, and other members of UPROSE. (Apologies to those missed, send me names and I'll add them on!)
Posted by BestViewInBrooklyn at 1:48 AM