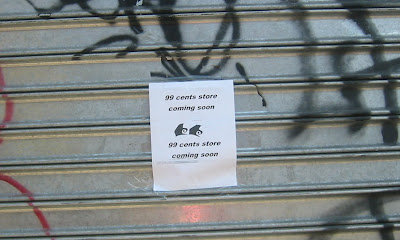 Signs like the one above are nothing new in Sunset Park. This one promises big things for the future of 49th Street. It's sad - for many reasons - when a place like Ho Ho Cleaners has to leave, but places that survive by taking in WIC vouchers and EBT thrive. It says a lot about where there's money to be made, for one. Also, these "groceries" don't actually provide groceries. Take a peek into a few of the 8th Avenue shops (including the one that replaced Ho Ho), and you see mountains of two things: Pampers Baby Dry diapers and Enfamil or Similac formula. I guess it's quite the profit margin. Or something. (According to a friend, she was approached about using her WIC and EBT benefits to purchase diapers and formula - which she didn't need. She would have been given half their cost in cash. No idea how that would work, but maybe they sell the diapers on eBay or something. But that's just my cynical speculation at work.)

So anyway, the long empty space on 6th Avenue and 45th is getting a new occupant. This is a catch-all shoppe. The new awning has 99 cents and wholesale and retail and WIC and Food Stamps and pictures of milk and Pampers and other items in English, Spanish, and Chinese all over it. 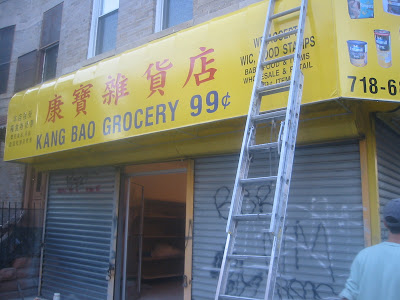 They were also changing the awning from KANG BAO to KING BAO. Apparently there was an error made in the printing. For some reason, the guy working on the A also started peeling off the K. 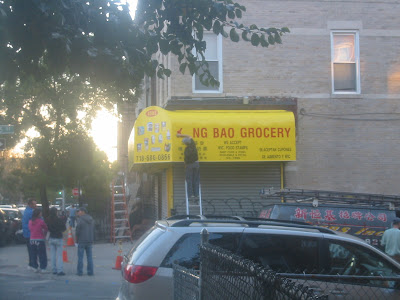 This new grocery is filling a space that has been empty for years. Another grocery was setting up, but never opened. The people gathered around were pretty excited about the activity, and a woman told me that they were opening next month. The man next to her said, "Maybe sooner!" a few times. When he saw me taking photos, he also said, "See? They're taking pictures already. See?" Nice to see some enthusiasm. 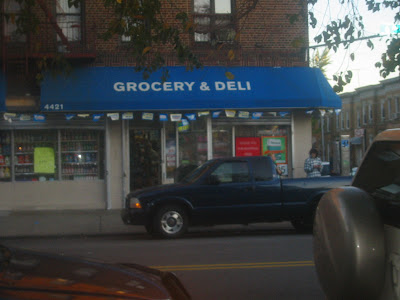 I can't imagine this longtime Grocery and Deli is too excited about it. However, if the new place reflects its 8th Avenue cousins, there shouldn't be too much competition. I can only wish each of them lots of luck. It's good to have something in that corner location anyway. Empty storefronts are never a good neighbor.
Posted by BestViewInBrooklyn at 12:49 AM

Do you know what the deal is with all the "WIC" stores that have been popping up? Do they get a special deal with the City to open? Does Sunset Park have a larger proportion of pregnant women and infants than other neighborhoods?

My husband once witnessed a woman trade in WIC checks for cash at a bodega. Pretty sad. I interrogated him wanting to somehow report it, but he couldn't remember exactly which bodega it was. Again, so sad.

there wasn't much chance of anything else going in there. I talked to the owner a few times because I was interested in opening a wine and coffee bar there, but he was insistent that it be a "grocery" in that space.

"For some reason, the guy working on the A also started peeling off the K."

I guess he would need to replace the K as the I takes less space than the A...

I think the idea is the store buys back the diapers for 1/2 the cost. The WIC recipient receives half the cash, the store the other. Then the store resells the same diaper to another WIC recipient. One diaper could in this way be sold 100's of times, defrauding the state of 1000's of dollars. I have also seen store owners sell beer and cigarettes to people using state benefits. It would be easy to pass judgement here, but how is this any different than the behavior down on Wall St? Should the poor be held to a higher moral standard than the wealthy?

To the person who asked "Do you know what the deal is with all the "WIC" stores that have been popping up?"

and also asked "Does Sunset Park have a larger proportion of pregnant women and infants than other neighborhoods?"

indeed the answer would be yes.

sunset park has many, many, many hispanic and chinese immigrants, both of which are groups that tend to have several children quite unlike 3rd generation whites who tend to have 1 kid. and who also tend to live in places like Park Slope and Carroll Gardens where they raise their kid.

they are also a group that tends to be poor, hence the WIC.

:sigh: Sometimes I read so many underhanded racist and derogatory tones from readers who do comment your wonderful blog posts. At least the Asians come here and open up businesses for their people/neighborhood. I live along 8th, stroll through china town all the time and I appreciate all their little businesses. They do for them, which is fine and dandy; the same way Syrian Jews do for their own, and Arabs for their own and so fourth. Anything illegal is wrong, yes, but its not just "immigrants" who do shady business. And a wine bar? In this neighborhood? To turn it into PSlope? come on!!!