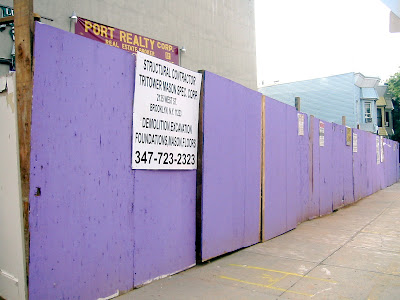 Here's what I like about this construction site (very non-construction oriented; purely visceral):

They painted the fence a (kooky) color - I call it Black Raspberry because it's the same color as the ice cream I used to scoop in my youth. I might not like it so much if I lived across from it, but I don't live across from it.

They RE-painted the fence just a few days ago. It's not a new color; I guess the paint just needed a touch-up. It wasn't covered in graffiti or flyers. Strange, but fine with me.

I've seen official-looking meetings of several people in hard-hats outside the fence. It actually seems like it's a project and not just a thrown-together, on-the-fly, make-some-quickie-cash venture.

I've seen everyone working and interacting at this site. It hasn't (so far) seemed like a case of some guys sitting around with their coffees while others are doing the grunt work. As most of you have probably noticed, those groups tend to break-down based on varying shades of brown.

There is an actual DOOR in the fence. It's not a swing-wide into the sidewalk and bonk passersby fence. It's a door, with a doorknob. Excellent. 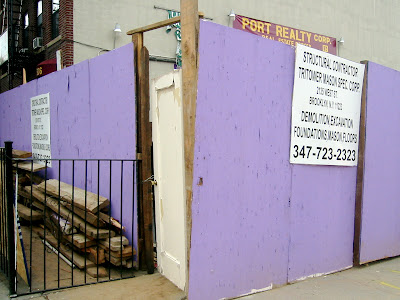 Here's what I don't like about the site (Again, purely visceral. I felt rejected.):

They didn't give up any information on what was going in there. I made the Condo Guess (due to the deep digging for what I assumed was a foundation and not a bunker). No response. I asked about whether it would have one or two commercial businesses on the ground floor. No response. At least the guy wasn't rude, just unresponsive.

Either way, it's another something interesting to look at and watch on 6th Avenue. Lots of construction activity.
Posted by BestViewInBrooklyn at 7:37 AM

kay - one more day of kit building, and I'm outta here! : ) See you all soon. Keep up with me on instagram if you like. Monika_Kinner on IG HERE.
backyard fence installation