Lost Brownstone is Rolling in its Grave 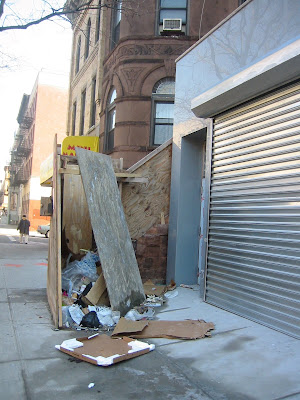 Here's what's left of the fencing around the new building that replaced a brownstone on 6th Avenue and 54th. I guess since the work is only going on INSIDE the building, they figure the fencing isn't necessary anymore. That may be, but take the whole darn thing down; it's becoming a trash heap and it looks pretty dangerous. There is a complaint in about this. The 9th one for this site.

This building will have three 3-bedroom apartments, one on each floor. It will also have some type of commercial fun on the ground floor.

**Not 24 hours later, the fencing and trash have been removed. 311 works! Or maybe it was that when I took the photo (probably with a scowl on my face), a woman who works in the laundry next door rushed out looking very worried. Either way, the trashy stuff is gone and now we can admire the facade in all its glory. 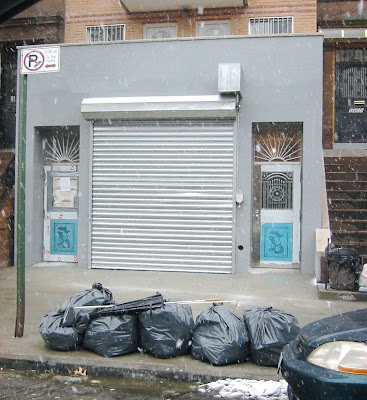 Posted by BestViewInBrooklyn at 1:55 AM

This is a real beauty. Which does it sport: Fedders or Friedrichs boxes?